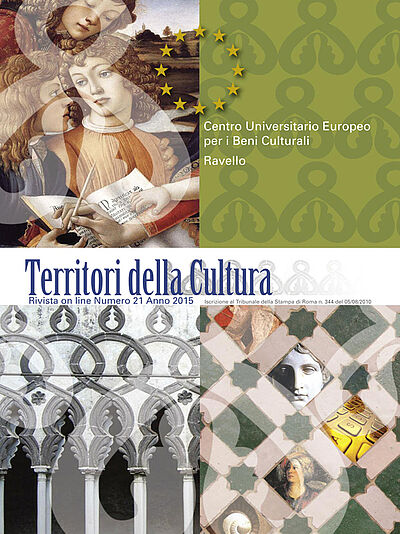 The following article was approved by the Consiglio Docenti del Master in Architettura, arti Sacre e Liturgia of the Università Europea di Roma and provided for publication. It will appear in the journal of the CENTRO UNIVERSITARIO EUROPEO PER I BENI CULTURALI. The publication date will be announced shortly. I would like to thank Prof. Angelo Molfetta of the Università Pontificia Europea Regina Apostolorum in Rome for his kind support. The online presentation of his work, in which he represents the same scientific approach, can be found at: http://www.sessaurunca3dproject.com It is a peculiarity that the sequence of the church modus tetrardus plagalis, which was destined to the praise of God, was found in the plan of this basilica. Starting from liturgy, Christian symbolism has a profound impact on Western art.

The fact that science fiction is not needed to combine all this is shown in my study, which deals with the development of keyboard instruments - from the ancient water organ to the keyboard of the touch screen. A speciality of the approach is that it ignores the limitation to a particular discipline, but simply uses every mental tool which is suitable for the processing of the research object. As a harpsichord-maker I took over this process from crafts.

On the basis of the earliest design of a stringed keyboard instrument, prepared by Henry Arnaut de Zwolle around 1440, stored in the Bibliothèque Nationale de France in Paris, this procedure was at once subjected to a test, because, although studied by many scientists before, I looked at the drawing with the eyes of an art historian and discovered an abstract representation of the Trinity in the form and arrangement of the soundboard rosettes. With few image comparisons, this could be proven.

But not enough. Arnaut, like a medieval cathedral builder, works with the use of a module and its integer multiples, which makes symbolic references possible. The existence of the rosettes already indicated the reference to the Holy Scriptures, and the mere juxtaposition of the numbers revealed further connections. Thus we meet: the 13-1 (participants of the last supper minus Judas), the 8 (salvation of the mountain preach), the 6 (gifts of the Holy Spirit), the 5 (wounds), the 4 (evangelists) ) As well as the 1 as the origin of all things.

Arnaut's instrument already shows the kind of keyboard we know today. Whoever uses the quinte circle in musical practice - for example while tuning instruments - knows some of these numbers from the harmonic system and therefore I took over the task to examine the Western sound system for its symbolic reference to the Holy Scriptures.

Since Arnaut himself does not say anything about it, and since further evidence is lacking-otherwise the symbolism of Western music would have been known long ago and would be taught as a part of general education in all schools and conservatories, it was to find an answer "Yes" or "No". This task I have tackled from several sides.

First of all, a journey through the European cultural history reveals a lot of places, where Christian symbolism can be observed. And it encounters us in such a concentration that music can not have formed an exception. This is based on a clear theological concept - the Catholic worldview.

Then we take a look at the development of the Western sound system and share our focus into the time before and after Arnaut. The path leads from antiquity to the church-modes, to the father of the church Aurelius Augustinus and to his book DE MUSICA LIBRI SEX, from which important theological knowledge about the consideration of sense perceptions can be taken.

Afterwards, we deal with the development of the musical temperatures up to the well tempered tuning. The sticking to a system, the keyboard still in use today, despite its limited usefulness - well understood from the perspective of medieval ages - proves that it must have existed another influence on music. On the occasion of a piano concerto, the musical schism is revealed, for the piano and orchestra act according to two different principles of order - for the moment a frightening realization concerning the model character of harmonia, but then a parable for the synergetic cooperation of different conceptions.

The non-logic structure of the harmonical system - e.g. The octave (8) consists of 5 whole-tone and 2 semitone steps, and we also find adventurous constructions as for example the "minor and major second" - makes clear the retention of a much older type of systematics. The original motivations can be easily reconstructed by the aid of a theological view.

In historical retrospect, one must not be surprised about such divergences, since all of this is based on an alienation of purposes, since the instruments originally werde not made only for music, but for the spiritual contact with God. The words: MUSICA DONUM DEI, LAUDATE EUM IN CORDIS ET ORGANO or: MUSICA PRAELUDIUM VITAE AETERNAE speak for themselves, as well as numerous pictoral sources.

Evidence can also be found in the oldest relics of stringed keyboard instruments, including an Italian Klavizitherium from the time around 1470 owned by the Royal College of Music in London. These are moving testimonies of that personal dialogue with God, recognizable by the inclusion of nativity figures, inscriptions and paintings, symbolic references (for example, a bridge in the form of the root of Jesse), or by concrete references to Bible verses.

To reconnect the former perception mode with that of the present, I chose the title: Sacred Phones. The use of the keyboard in the Late Middle Ages.

How such a collective loss of memory could happen is an implicit question. The Middle Ages are far remote from our time through another world view. Referring to Jesus' statement, "My kingdom is not of this world" (John 18:36) it would not even be blasphemous to speak of the creation and control of the world by an extraterrestrial. The historical testimonies are everywhere - not only in cathedral constructions. The French Revolution marks a radical change - here we come back to the cruel destinies mentioned at the beginning - and from then on, enlightenment was seen not in spiritual, but in rational knowledge (siècle de la lumière).

My study points out that it depends on the light as such and not on the spiritual window through wich it shines in. It contributes to the meeting of sciences and church as well as to the interdisciplinary and intercultural dialogue.

Moreover, the work uncovers a foundation stone of European identity, because the starry wreath in the European flag can still be connected with our harmoncal system and the necessity of peaceful coexistence. This is the treasure of knowledge, salvaged from historical and presently most painful experience. The Giulia Varano's spinet, owned by the Metropolitan Museum in New York, bears the inscription: "RICCHO SON D'ORO ET RICCHO SON DI SUONO, NON MI SONAR SI TU NON HA DEL BUONO", and expresses that the most important things in live are not wealth and sensual pleasure, but only the good in man.