41 What became of the Christian symbolism of Western harmony?

Opinions differed as early as the time of the Reformation: while Huldrych Zwingli (* 1484- † 1521) completely banished organ music and church singing from church service, John Calvin (* 1509-1564) placed especially high demands on church music, because the church service according to his believe takes place in front of the face of God and his angels.

Also Martin Luther (*1483- †1546) appreciated the music and expressed in one of his table speeches: "The most beautiful and glorious gifts of God is the music. The devil does not wait for her. The notes bring the text to life. Music drives away the spirit of sadness, as one sees in King Saul." (M. Luther, WA Tr 1, 490, No. 968).

Also in Johann Heinrich Buttstett (*1666- †1727) we find a defender of the divine origin of music. His treatise "Ut, Mi, Sol, Re, Fa, La, tota Musica et Harmonia Aeterna", published in 1717, can be seen in succession of the Jesuit Athanasius Kircher (*1602- †1680), who summarized again the Catholic worldview in the period of Counter-Reformation. The comparison of the frontispieces makes this clear: 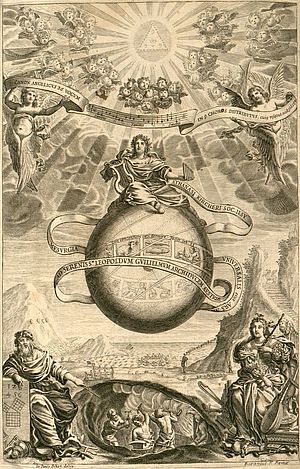 Athanasius Kircher: Musurgia Universalis 1650. Below left: Pythagoras pointing to the smithy, opposite him Minerva as protector of the arts and inventor of modern instruments, above Apollon musagetes on the globe with the attributes of the lyre and the panpipe, pointing to his rivalry with the shepherd god Pan - in the sky the divine triangle, representing the Trinity, surrounded by angels. Two cherumbim carry a tape: "Canon Angelicus 36 [triginta sex (12x3)] vocum ... in 9 [novem (3x3)] choros distributus" and thus the reference to a work by Romano Micheli in which three times the word Sanctus is repeated. In the divine triangle itself, the number 9 (3x3) can be seen three times, as well as the eye of God, in the center of the volume under the notes of the work mentioned, the word Sanctus. In addition, the figure shows numerous other details and symbolic references. 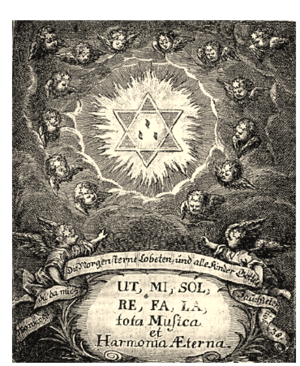 Johann Heinrich Buttstett: "Ut, Mi, Sol, Re, Fa, La, tota Musica et Harmonia Aeterna", 1717. The title copper shows the Star of David with three Hebrew Iods, representing the persons of the Trinity, surrounded by angels, each with a star in the hair. On the ribbon held by two angels, the reference to Job 38: "Where were you, when the stars of the morning praised me and all the children of God rejoiced?" The syllables Ut-Mi-Sol stand for the major triad, the syllables Re-Fa-La for the minor triad, creating an acoustic analogue to the Star of David. The connection of the triad with the trinity occurred unexpectedly late and is probably first found in Cyriacus Schneegass (*1546- †1597). 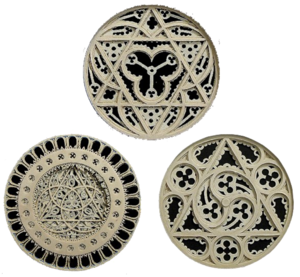 Otherwise, we meet the Star of David in the form of soundboard rosettes, for example on a harpsichord of Pertici from 1681, under it an anonymous representation of Trinity (left) as well as such a representation by Johann Heinrich Silbermann 1776. Because of their number and the expenditure of their production such rosettes prove, which in numerous variants refer to the Holy Bilble, a unbroken spiritual orientation since Henri Arnaut de Zwolle (* ca.1400- † 1466).

Buttstett is for his part not counter-Reformation oriented but directed against the free-thinking of his contemporary John Toland (*1670- †1722). He had stated with reference to John Locke (*1632-†1704) that Christianity should be grasped with human reason, after which his work was publicly burned in Dublin in 1697, which led Toland to flee to London. Against this background, the other book titles Buttstetts have to be seen: "Reasonable Thoughts on the secrets of Christians and in particular on the mystery of the Holy Trinity" (1735), "Reasonable Thoughts on the Nature of God" (1736) The titles suggest the thought that he oriented himself to the works of the philosopher Christian Wolff (* 1679- † 1754).

At the same time Buttstett turns against Johann Mattheson (*1681- †1764), who argued that the task of music is not only to sound for the glory of God - SOLI DEO GLORIA - but to please the people and to make them dance too - based entirely on the gallant style of France. It was not the Reformation that led to the secularization of music, but the enlightenment with the consequence of the destruction of the medieval worldview, in which music played a central role because it was regarded as a direct connection to God.

The demonstration of the Harmonia Aeterna at Buttstett resembles thus a last fight against the currents of time, which in the heading of the VI. Chapter of his above mentioned tratise is expressed: "Caput. VI. Proves that the music will last forever, and that one day music will be used in heaven with exactly the same sounds, we use here in the world."

Also Lorenz Christoph Mizler (*1711-†1778) sees himself as a defender of the ancient and true doctrine: "The wise and ancient Greek philosophers considered music the best way to cheer a student to the sciences, and the Pythagoreans have such founded in Experience, but in our days, when the world has become more and more congenial by the sake of new-fashioned wisdom, the opposite comes true. In later times, this opinion will strongly be rebuffed with good reasons."

Since Johann Sebastian Bach had joined the Corresponding Society of Musical Sciences Mizlers and presented his art of the fugue as a year's gift, there are some indications that his worldview is reflecting in his work. It is precisely a unique musical-theological manifesto. In this sense, the allusion to Psalm 118, 22 has special significance: "The stone that the builders rejected has become the cornerstone." From the context of the time it follows that he could not have meant anything else than music with the cornerstone, whose position was misunderstood by well-known contemporaries in his opinion and according to the opinion of the members of the partnership. Their concern "to restore the majesty of the old music" can only be understood if one has an idea of its former value. It contains basic rules for social coexistence. The reference to Pythagoras, who lived long before Christ (* 570 - † 510) allows a non-denominational perspective, with which already announces Enlightenment itself. Perhaps it also implies that for a long time after the Thirty Years' War, people had enough of religious conflicts. 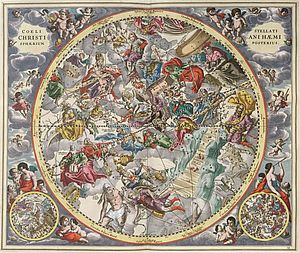 Sky map of Andreas Cellarius from his Harmonia Macrocosmica from 1660/1.

The efforts of Andreas Cellarius (*1596- †1665), who designed a sky map with Christian constellations, came already too late to be generally enforced. The introduction of a new calendar (revolution calendar from 1789) and the introduction of a 10-day week and the decimal system - the day was divided into 10 hours of 100 minutes - speak for themselves, because it was to remove all Christian symbolic references from live to make the view free for rational thinking.

Even when Charles Darwin (*1809-†1882) put knowledge about the development of living creatures on a new basis - his work "On the Origin of Species" appeared in 1859 - he too was confronted with hostility because he not alone had questioned the story of creation but also the self-understanding of man as the image of God. Sigmund Freud (*1856-†1939) spoke therefore because of the overturning scientific discoveries whose contents violated strong feelings, 1917 of the "three insults of humanity": the cosmological offense (Nicolaus Copernicus), the biological insult (Charles Darwin) and the psychological insult (Sigmund Freud). The fourth thing to add is the musical insult: the loss of the ethical-symbolic content of harmony as a result of Enlightenment.

Even though, the spiritual esteem of music is constantly rekindled by individual composers, e.g. with Olivier Messiaen, (* 1908- † 1992), the knowledge of the former symbolic penetration of the theory of harmony has been forgotten. Their last heyday coincides with the work of Johann Sebastian Bach.

The artistic design of the Protestant Peace Church in Swidnica, Poland, gives a visual impression, giving the music a particularly high status. There worked the Bach student Gottlob Christoph Wecker (* 1707- † 1774). At the highest point above the altar the organ appears and with its music creates an immaterial transition to paradise. It is not by accident that the celestial Jerusalem becomes visible in the ceiling painting. The structure of the altar, structured according to visual considerations, has an acoustic equivalent in the art of fugue with its hierarchical gradation, its symmetries and reflections. 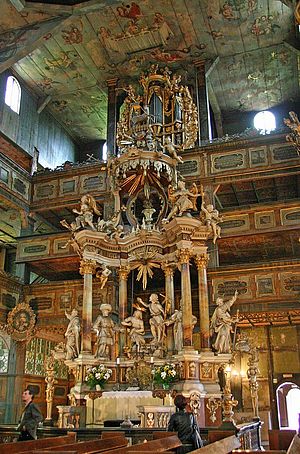 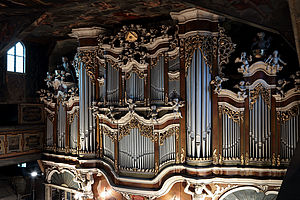