For itself, research on cultural history makes an unproblematic impression. If the academic processing tool is available, decision is made with regard to the processing subject and after reading the available literature, the source situation and the research subject indicate the direction.

With regard to the tone system, the fact is helpful that the physics of string vibration has not changed over the centuries and only the names vary. A consecutive numbering is clearly recognizable as such, as is an alphabetical structure. Against this background, deviations are particularly noticeable, e.g. C major as starting key without a sign, the name octave for an interval consisting of 5 whole and two semitone steps - in another reading of 12 semitone steps - or the designation Prim with the value zero . There must be reasons for such deviations.

The same applies to analogies that point to a different context, e.g. the idea of ​​high and low notes - which in reality do not exist - as well as the germ. designation sound ladder. From the cultural-historical context it becomes clear that we are dealing with an analogy to Jacob's ladder. The findings are supported by written sources, including those of the Enlightenment, who defended themselves against any influence of the church. Musical requirements and theological interpretation can thus be distinguished - including creed (e.g. J.S. Bach, see blog 45) and indoctrination *.

The results are now the table and are being made available to political decision-makers. Several blog posts and the buttons: Objectives and News report on this - also on the debate about the acceptance of religious symbols in classrooms. With the recognition of the results it becomes problematic - also in a legal sense. What about the curriculum? Can a generation withhold knowledge from others? Who is authorized to do so?

Switzerland's self-image includes its neutrality and its commitment to resolving political conflicts, and since religious beliefs can be viewed as provocations, it seemed appropriate to reinterpret the historically existing symbols.

In their explanation, the following pictograms make the Christian cross a "plus" - that is, one strives for a positive connotation of the instrument of suffering - and replaces the dove of the Holy Spirit with the dove of peace. 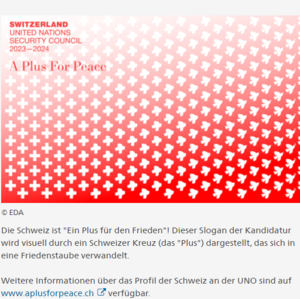 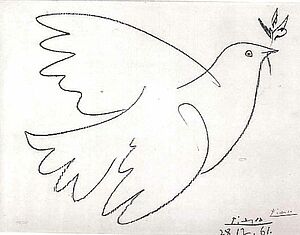 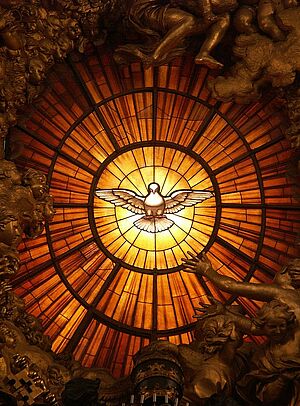 The 7 gifts of the Holy Spirit are since Aurelius Augustine: fear of God, piety, love of neighbor, bravery, mercy, love of enemies and wisdom. The dove of peace is therefore not a recent creation and the ethical standards are no higher today. Only the © is missing from Bernini. There is no shortage of other examples. 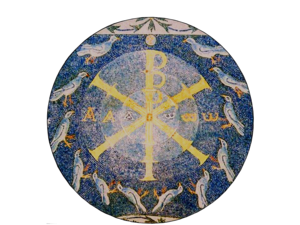 The theory of harmony by no means requires hiding one's own cultural background out of consideration. What would be the point of research then? Rather, it educates to recognize the otherness of a foreign identity as equal to our own and therefore also to accept the medieval worldview in our tone system. Schoolchildren - with whatever cultural background - can learn from it how indoctrination works, visible through manipulative intervention in a situation that is mathematically and physically different defined. In addition, they get to know the religion-neutral standpoint of science, which always separates the factual from the personal and is therefore particularly conducive to intercultural dialogue. This makes it possible to read critically and with a given distance in the traces of history, which is the history of mankind. On this, as well as on the fact that we are dealing with a global ethic of Greek origin, the objective of having occidental harmony - the name is derived from Ἁρμονία, the goddess of unity - included in the list of the intangible world cultural heritage of UNESCO is based.

* "Indoctrination (Latin doctrina, 'instruction') is a particularly vehement instruction that does not allow any contradiction or discussion. This is done through the targeted manipulation of people through a controlled selection of information in order to enforce ideological intentions or to eliminate criticism." (Wikipedia)