As part of research on the cultural history of keyboard instruments, the Christian symbolism of the Western tonal system came to light, which in turn is part of the Catholic world view.

The completion of this world view that has become possible in the first place has a direct impact on the quality of experience, especially in Christian sacred buildings, in which music can no longer be perceived only as a decoration foreign to the content, but as an integral part of the cult act and the liturgical process. Even more: The immaterial Jacob's ladder to bliss (scale) illusionistically demonstrates the realization of a concrete biblical content and points to a relationship between imaginary, immaterial and material cultural assets. Connecting element is the Catholic theology with its numerous symbolic references. As from the pulpit, only things pleasing to God should be heard from the organ loft - that's the idea. This provides a framework that the individual musical contributions fill with content - hymns, cantatas and chorales also with their own texts. (cf. Blog 3: "The credo of Johann Sebastian Bach in image and sound." such as  Blog C4 "Pythagorean tuning system or myth of origin of Western music?" )

In Western sacred art, the theory of harmony is applied holistically across genres and epochs, because the arts, which, like the tones, do not want to have anything to do with each other, speak the same language there. This is no coincidence - and the influence of the church reaches far into the profane area. In both cases, external bridge builders are responsible for the interaction: in the acoustic area, this is reflected in the created order structure of the interferences, the tunings. In the arts, subject, symbolism and aesthetics, composition, form, color and perspective ensure accordance. The insights of music spread to art as if visibility were just another manifestation of the audible. This also does not happen by itself.

Overall, the Occident is endowed with cultural assets that are directly related to the circumlocutio mentioned, the ideological circular reasoning, and of course to the underlying creed. Compare the menu item: "Church environment". Visitors from other cultures recognize this peculiarity as typical of the continent.

The organ - and here we are for a moment back to the keyboard instruments - is therefore to be regarded as an independent connecting element to the divine, which is why it often has design similarities with the altar, such as painted organ wings. The organ positive pictured below shows Jacob's dream of a ladder to heaven, on which angels climbed up and down, in its base area. The motto above the keyboard reads: "Everything that breathes praise the Lord, glorify and praise him forever, Hallelujah". The angels playing music on the organ wings point to the intellectual connection between Jacob's ladder and the tonal scale. 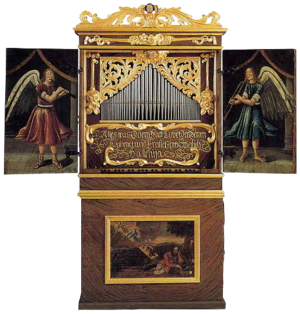 The connection of music with the sacral architecture is based on the same Bible passage, as it says: "Jakob awoke from his sleep and said: 'Indeed, the Lord is in this place and I didn't know it!' He was frightened and said: 'How terrible is this place! Here is nothing else than God's house; and here is heaven's gate.' "Genesis 28:16

By interpreting the tonal scale as Jacob's ladder, music became one of those elements leading the sacred space to its purpose. Therefore music with all its references given by theology should be kept in mind in these spaces - how anyway the spiritual presence of a world view is necessary in order to understand cultural assets that owe their existence to it. 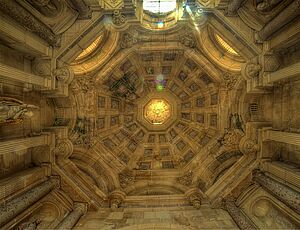 Cupola of the chapel of Jean Forget in Toul Cathedral related to the 8 beatitudes, the 8 heavenly spheres and the octave - the epitome of consonance and acoustic peace (cf. Video VII: "How the octave got its name") -  also with reminiscences to the Pantheon in Rome. This antique building in particular anticipated the architectural centering of light. It is therefore not surprising that the Christians converted it into a church without further ado. 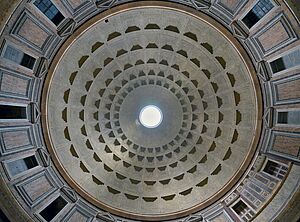 Cupola of the Pantheon, Rome

In the same way, the ancient theory of harmony was reinterpreted and placed at the service of the church.

Only a polydisciplinary approach can do justice to such complete works of art through its analytical conclusions. In this way, the strong effect of synergetically calculated sensory impressions finds a causal explanation.

The rational approach reveals that especially in the Christian theory of harmony - very different from the Greek model - mathematically hair-raising constructions were accepted in order to be able to show the corporate identity of the world manufacturer in the field of music as well. In the emotional realm, precisely these processes are responsible for a unique quality of experience, because they evoke the idea that all manifestations actually owe their existence to one and the same creator. In this way, occidental sacred art predisposes and makes us receptive to monotheistic belief. The psyche of the believers recognizes in her a spiritual home, supported by John 14:2 "In my Father's house are many mansions".

Cultures arise from the human need for spiritual home.